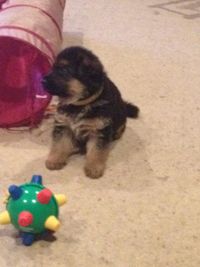 This is for those of you who think that breeders such as myself are too difficult, too elitist, too hard and expensive to get a puppy from because all you want is JUST A PET!!!

Why do you turn JUST A PET into a negative? Why do you think that JUST A PET is less than a show dog or a trials dog or a working dog? Why do you think that you are settling for second (or third or worse) best? And those reading this who, have decided that they want a GERMAN SHEPHERD JUST A PET!!! Why do you want a German shepherd? Because of its temperament? Because of ifs looks? Because of its energy? It's joy in life? Or one or some of many other wonderful German shepherd traits??
How do you think we keep these things in our breed? Simple! It’s by careful, selective, planned breeding to always try and produce the best possible so that any JUST A PET's we put in homes can give those characteristics that are so much a German shepherd. It costs a caring breeder just as much to produce JUST A PET as to produce a show or working dog. They are usually the same litter and usually could be the same pup!!

I would never breed a litter to simply produce pets for the pet market. This is puppy milling. This is also MUCH cheaper. You do not need to work hard at proving your dog’s abilities. You do not need to check on health and temperament. You do not need to match up the BEST stud for the bitch you have. The first male (entire) you find will do (easier if he lives at your place ... and cheaper).
The fact that I would never breed a litter to simply produce pets for the pet market does not mean that I would not happily sell a whole litter to JUST A PET homes – It means that they would be getting the quality Shepherd they deserve as their JUST A PET!!
If this is not what you want from your puppy there are plenty of 'breeders' out there who mate (or 'accidentally' allow the mating of) their male (or their friends male) to their bitch and will happily sell you a puppy. Probably even proudly announce that they are registered with whatever controlling kennel club is in your country..... Well so can any purebred dog born of purebred parents be. Doesn't mean a thing about health, quality, temperament, ability, etc.
It is up to you to decide whether your JUST A PET should be considered by you and others as 'THE BEST' or whether you go out with the idea that your dog is second best to the 'competing' ones.

To me JUST A PET is the most special dog there is!